Dawah and Tablig & Its Ethics and Rulings 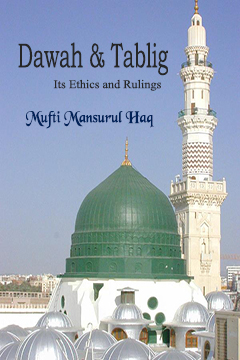 Allah ﷻ has given us to choose from two paths, one is the way of guidance and paradise. And the other is the path of misguidance and hell fire. In the holy Quran Allah ﷻ mentioned

We showed him the Way: whether he be grateful or ungrateful (rests on his will). (Sura dahr-3)

This world is called “Darul Imtihan”, meaning a place of test. Here the slave will be tested, that he obeys Allah ﷻ or obeys the shaitan. The next place after this world is called the place of “barzakh”, which basically is a waiting room. If I buy a first class train ticket, my waiting room will also be first class. For a second class train ticket, I will have a second class waiting room. Similarly, whoever will do good amal (actions) in this world; his life of the grave will become comfortable accordingly. Who’s amal is bad, his life in the grave will be miserable consequently. After the time of barzakh the Day of Judgment will arrive. There Allah ﷻ will reveal the result of his slaves test.

Warn them of the Day of Assembling [Resurrection] of which there is no doubt, when a party will be in Paradise and a party in the blazing Fire. Sura Shura-7

Allah ﷻ has sent hundreds of thousands of prophets for men to acquire success in the test of this world. The prophets made effort on the heart of the people in order to take out the false believe on the creation that already formed and incubating the belief of the creator in the heart. Because, the belief on creation is the pathway of shaitan and hellfire. And the pathway of Allah’s ﷻ pleasure and paradise is to have yaqeen on the sovereignty of Allah ﷻ. We observe that the deliverer is delivering the goods, and valuables from our friends and relatives to our doorstep. Similarly our farm, job, business are the deliverer of Allah ﷻ in reality. Mainly Allah ﷻ is providing. If one deliverer is fruitless, there is nothing to be worried, Allah ﷻ has uncountable deliverers, Allah ﷻ will continue to provide our sustenance through his deliverers.